In case you are a little vague about your primaries and secondaries, you can start understanding them by building  your own color charts. The three primary colors are red, yellow and blue. When you combine two primaries, you get the secondary colors. Red and yellow gives orange, yellow and blue gives green, and red and blue gives purple. When you combine all the three primaries, you get a grey or a neutral color. When you combine a primary with a secondary that is made with the other two primaries, you will get a neutral color beacause, basically all the three primaries are present in the mixture. For e.g when you mix yellow (primary) with purple (secondary made with the other two primaries, blue and red), you get a neutral hue. This yellow – purple pair is called a complimentary pair. Similarly, the complimentary of red is green and the complimentary of blue is orange. You can get pleasing neutrals, if you use single pigment transparent colors when mixing. These neutral colors can be pushed towards muted grayed pinks, reds, blues etc by favouring those colors in the mixtures. These can be used as shadow colors, for dried foliage, walls, stones etc.

Reds and yellows are warm colors and they appear to come forward while blues and greens are cool colors and they appear to recede away from you. Observe trees in a wide open space. The trees near you will look greener (green has yellow in it which makes it warmer than blue) , with increasing distance away from you, the trees look more and more bluish-grey. In fact, towards the horizon, all the elements on that line are sort of merged into a  uniform bluish gray with no detail to tell one element apart from the other. This is called atmospheric perspective. In a painting, you translate this reality by using mainly warm colors in the foreground and cooler colors in the background. The foreground elements should have more detail and get fuzzier and fuzzier as you move towards the horizon. 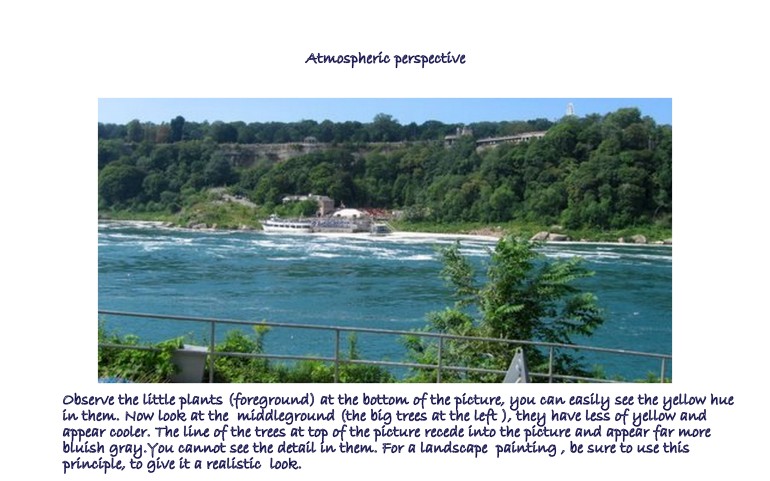 Take a red from your palette and add very little blue to it (donot make it into a purple). Take the same red in a separate well and add very little yellow to it (donot make it into an orange). Now paint these colors in two swatches next to each other. The first red which has a blue tinge in it is cooler than the second red which has an yellowish tinge in it. Thus, even though red is a warm color, the first red is cooler than the second red. You can paint this cooler red (my making it a little more muted by adding its complimentary) into the distance in the background without making it look as though it is coming forward or sticking out. Observe the two reds and see if you can make out that one appears to come forward while the other recedes. It helps to paint these swatches one above the other (the above one being smaller) rather than next to each other. In the same way, you can have a warm blue when you compare it to a true blue which does not have red in it. The colors that you get from the manufacturer contains warm versions and cooler versions of a single color. When mixing, if you want a bright color, see that both colors are either warm or either cool. If you want a slightly muted color, you can mix both warmer and cooler colors.

It helps a lot to make your color charts with the colors that you have. Here are two that I have made with Schminke colors: the first one consists of auerolin yellow (neither warm or cool), dark red (bluish) and ultramarine blue; the other triad is made of indian yellow (warmer than aeurolin because it has some red in it), ruby red (which tends towards pink) and pthalo blue (warmer, has a little yellow). The colors donot come up accurately on the monitor, try doing your own charts.

You really cannot see much difference in the primaries on the monitor, though there is a discernable difference in reality ……..see how different the secondaries are; You can make beautiful violets with reds tending towards pink and warmer blues as seen in the second triad. In the first triad, a deep purple is formed by a bluish red and ultramarine blue.

Make a chart with all the colors that you have and see what mixes that you come up with. You can use this as a reference for your paintings. 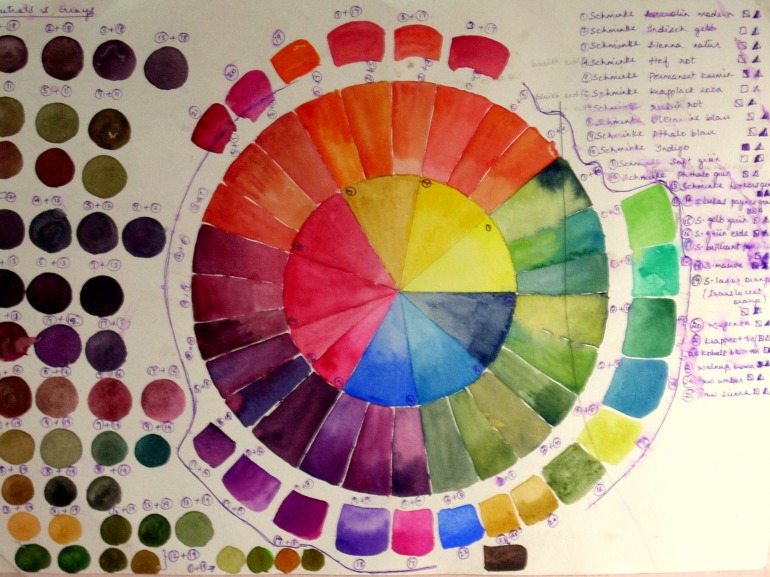 The inner circle consists of the store bought primaries and the circle enveloping that are the secondaries formed by mixing these primaries. The outermost colors in the scattered circle are store bought secondary colors.