Here is a photo of the rest of the foreground leaves. They look very light but this will help in pushing them forward from the background plane. I`ve also started on a couple of veins for the main fg leaves. A fine dark line on one side will make the central vein look more prominent. For the rest of the veins I`ve used DS chinese white tinted with a yellow green.

Here I`ve done the bunch of leaves on the right side, they are somewhere in the middle layer; in shadow , so of a dark value. Done wet on dry, with few details like central veins here and there and a couple of shadows to establish some form for a few of them.

Started with a few of the background leaves..

I`ve put in a very dark value in between the background leaves that I had painted (photo above), so this forms another plane. I`ve given the wall behind the foliage a rose-grey tinge instead of a neutral grey. Red is the complement of green and using this contrast makes both the colors (green in the leaves and red in the wall) appear more vivid than in any another combination. 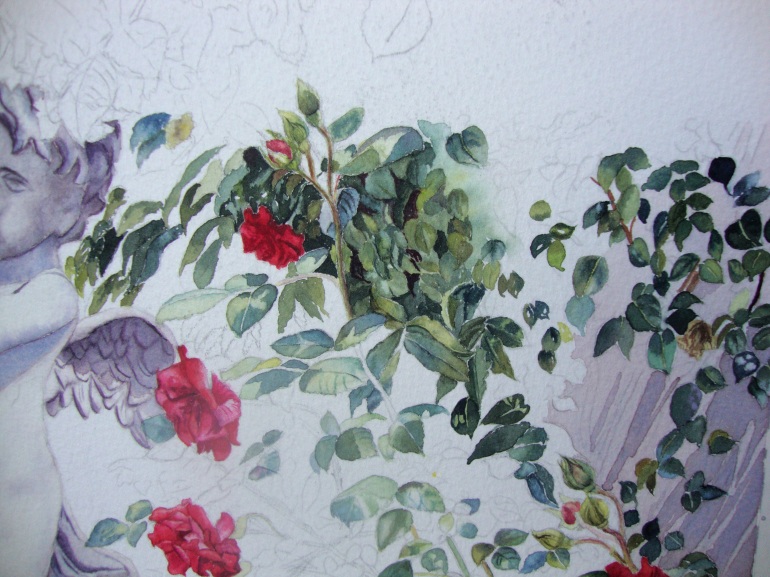 Here (the portion to the right of the wing and above the larger rose), I`ve used another method; I took a dark value and put in that first, leaving white shapes for the leaves by negative painting.  Now I can either bring in the dark value of the bg into the white areas with a damp brush or use other colors (using other colors can be a bit tricky, you have to make sure that they are subdued enough so they don`t jump forward into the fg plane). You can also gently lay in a clear water wash over the bg leaves and drop in darker values (like I did on the right side of the buds). Whatever method you use, the aim is to create the illusion of foliage growing in multiple planes, one behind the other. Every area need not be perfectly understandable to the eye, that is not how you would see it in nature. Bits of information here and there lets the viewer construct reality but also give room for imagination.

If you would like to follow along, here are my references….. The roses looked so beautiful that I just took pictures from every angle so now I have been able to construct this scene, but still I had missed a spot …….ha haaaaaaaa and I don`t have information for an area (top part, above photo) guess I`ll have to improvise..