Go to next article on Principles of Art: Balance

For many of us, the choices made in color and other elements while creating artworks is instinctive and often produce harmonious results and through practice and study we can refine these choices a great deal. Usually its easier to tell whether a painting is working or not than to identify the exact reasons why it is not working. But luckily, we have a whole wealth of information that has been studied and collected by generations of artists. Success in creating any kind of visual arts requires  the basic understanding of the design elements and principles of art.

The elements of art are the basic building blocks of an image:

1. Line:  A line is a continuous movement of a point along a given surface. Outlines or edges of shapes and forms are also called lines and can be dotted, dashed, zigzaged, irregular etc. They can have different thickness, length and direction. Lines can have qualities like of pent up energy of a tight spring shape, lazy lines, calligraphic lines, lacy lines. Adding color to these lines gives them other interesting qualities.

2. Shape: A shape is a two dimensional, enclosed area that is created by an obvious boundry like a line or one that is only implied by differences in color, texture or value.

3. Form: A form is a three dimensional object or something that is made to appear as three dimensional in a two dimensional artwork. Shapes and forms should be arranged so that they are well related to one another. Individual forms placed at equal distances will usually not work. Overlap some of them together a little. This will also give the impression of depth, as one form will be slightly behind another.

2. Intensity or Chroma: how bright or dull a hue is. E.g: cadmium yellow has a higher chroma than a raw sienna.

3. Value: how light or dark a hue is. E.g: blue mixed with white makes for a lighter value than the unmixed blue.

6. Texture: Texture is the feel of an object, smooth,fluffy,rusty… Texture can be actual or implied. Actual texture can be felt on the surface whereas implied texture appears as smooth or furry but cannot be felt.

The principles of art are the tools that are used to organise the elements:

1.  Unity: Unity is achieved when we get a sense that the work is united and whole and each element belongs in its place. It comes from the use of the other principles.

2. Emphasis: Emphasis refers to the centre of interest or focal point of the work. One focal point is easier to manage than two, if there are two, they are usually placed diagonally to each other and one is made more dominant than the other. Other elements are used in such a way as to guide the eye through out the painting and to the focal point. Unless it is a formal composition, the focal point is not placed at the dead centre of the work. Moving it off-centre makes it look much more interesting. Divide the entire area into thirds both horizontally and vertically. The intersecting points are good locations for the focal point.

3. Balance: Different elements have different visual weights and balance refers to the way they are arranged in a composition such that the work looks stable. Balance can be symmetrical, assymmetrical or radial. An architectural artwork usually has vertical symmetrical balance, meaning that the two opposite sides of a line drawn vertically along the centre of a building will be identical or near identical. Horizontal balance happens when the two sides of a line drawn horizontally along the centre of the work are identical or near identical. Radial balance happens when the elements are distributed about a centre point like in a wheel or flower for example.

4. Proportion: Proportion refers to the relationship of the sizes of the different elements of the artwork. The different elements must be brought to scale with each other. For e.g the head should be in porportion to the rest of the body; another example is in a landscape: one can only feel the sense of vastness of the open skies when the objects in the foreground are proportionally smaller.

5. Movement:  Movement is the path that the eye travels as it moves through the artwork. Movement can be created through

1. Rythm: Rythm is created by the recurrence or repetition of similar elements throughout the painitng. The eye then follows these repetitions which can be varied a little to add interest. E.g: the same or slightly modified color can be echoed through out the painting to make the eye move through the entire painting and then reach the focal point. A similar form or shape can be repeated, alternate lights and darks can be used, abstract works sometimes donot have a focal point and repetition is used here to unify the painting.

2. Gradation: Gradation is the gradual change of any element, which creates movement. For e.g the receding posts in a fence is a great way to lead the eye through it towards the horizon. Gradation can also be in color, value or temperature. Usually solid blocks of color next to each other donot work unless you want to represent something forceful like violence. Gradual and subtle changes in color is always more graceful.

This is a painting by the Dutch painter Piet Mondrian (Composition with Yellow). The white squares have been painted in layers and they are not completely white. Some are a warm white, (creamish) and some a cool white, (bluish) and this makes for a very subtle gradation in color and the eye as it moves from one rectangle to another sees this jump in color which makes the whole area seem to pulsate. There forms a path between these pulsating whites and the four pure spots of colors. The red square, the focal point is placed roughly according to the rule of thirds and the yellow one diagonally opposite to it. The little bit subdued blue and the small red rectangle donot attract attention away from the focal points but add interest. The distances between the black lines from left to right first keep decreasing, keep same for the next two coloumns then increase, this also forms a rythmic movement. This forms a simple, yet effective and harmonious composition.

3. Action: Movement can also be created by action, that is from an outstretched hand, the direction of a gaze, a falling ball, a flying bird etc such actions can be used to lead the eye effectively and so should not be arranged haphazardly.

In this painting, Woman with a parasol by Claude Monet, the blue skies and directional lines of the twisting skirts and blowing veil very effectively convey to us the movement of the wind on a warm, summer day. These lines lead the eye upward along the line of the parasol to the green of the parasol which again has lines leading radially downwards, connecting the eye to the green of the grassy path. The shadow on the path connects the figure with the path, the boy gives added depth to the scene as he is placed behind the grass and so on another plane, the upper portion of the parasol and the white dress reflect the blue skies. The boy, woman and the parasol form a triangular composition and their gazes connect with the viewer inviting us into the warm and windy scene.

6. Contrast:  Contrast occurs when two different elements are placed next to each other. The greater the difference the greater the contrast. The eye is naturally attracted to the region of highest contrast. Contrast adds variety and interest to the composition. Too many similar components will make the work monotonous but on the other hand, too much contrast will make the work confusing and jarring to the eye. So a balance must be achieved between similarity and contrast. Different textures like soft feathers and hard stones create contrast. Round and sharp objects create contrast.

— Hue contrast is achieved by placing different, pure hues next to each other.

—A light dark contrast of values (Value Contrast) is a very effective way to create a dramatic scene which demands immediate attention from the viewer. In this painting by Pierre-Auguste Renoir (1841-1919) (French artist who led the Impressionism movement ), La Loge (The Theatre Box), we can see the extreme contrast between white and black on the stripes and also on the man`s costume. The light-dark stripes on the skirts and the arms move upwards and converge towards the woman`s face.  Despite this strong contrast it is amazing how  Renoir has brought about a delicate look to the woman. He has done this through the beautifully and subtly toned whites, which have dusky pinks, mauves, blues and dull golds, this treatement of whites in itself is stunning. Also, he has brought out the delicate look through the transparent frilly cuffs, the light peach roses at her bosom, the light pink roses in her hair, the red-orange of her lips, the shimmering pearls at her throat and ears, his treatment of the skin, and mainly through the innocent look in her eyes and on her face. There is also contrast at the cuffs of the man`s sleeve but it is not as strong as the contrast between the pearls and two black stripes at the woman`s neck and bosom. The man is kept almost entirely in a cool, bluish shadow except for the the area of warm white at the bottom of the shirt which actually points upwards towards the woman`s face and so the figure of the man does not interfere with the foreground woman`s figure. The gaze of the man is upwards and out of the picture plane but this also does not pull the viewer`s eye out of the picture because it is blocked by the opera glasses . 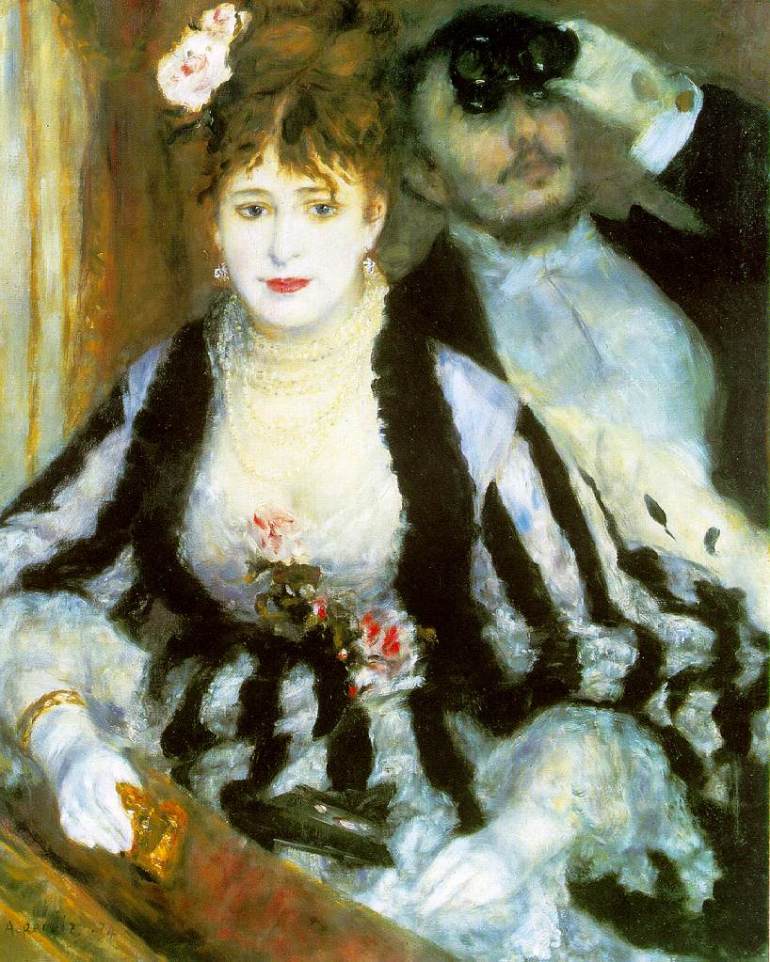 —Temperature contrast is the contrast created between warm and cool colors.  JMW Turner, who was called the painter of light, first painted in these techniques of intensity and value contrast. This painting shows how he has effectively placed the warm , yellow, orange, red colors of the sunset and the smoke blowing out of the funnel of the tugboat against the cool, blue  of the skies to pull the eye towards the focal points and around the painting (through the directional lines of the clouds)

— Intensity contrast is a very interesting technique, it is formed by the contrast between pure, strident colors against subdued colors so that the pure color looks even more brilliant due to the surrounding large area of subdued color. Claude Monet, influenced by JMW Turner`s painting tehcniques founded the French Impressionist painting, the philosophy of which is to paint the ever subtle variations in the atmospheric and light conditions in nature as applied to plein-air landscape painting. In intensity contrast, the important thing is that the values remain more or less in the mid tone range, only the intensity of the colors changes from pure and bright to subdued and greyed down. Introducing large areas of darks will ruin the delicacy of the work. In this painting, Impression, Sunrise (This name was first coined by an art critic to describe away the work in a derisive way, as it gave only an impression of a sunrise and looked to be unfinished, but that name became popular with the public and later the Impressionists themselves adopted it) The broken, orange lines against a subdued purple gives a shimmering effect of light forming a path on the waters leading the eye towards the brilliant sun which is red-orange against the dusky purple of the sky which also has downward strokes of a pale orange.

8. Harmony: Harmony results from the proper relationship between similar elements in a composition.

Go to next article on Principles of Art: Balance: