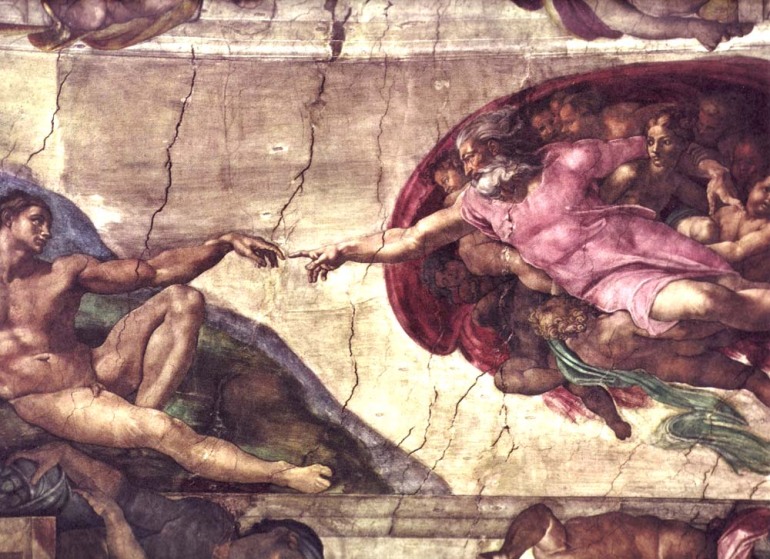 In 1505, Michelangelo was commisioned by Pope Julius II to build his papal tomb. It was to be a massive project , he had designed a three-story monument which would have contained over 40 marble  sculptures. But due to mounting money shortages, he was constantly interrupted to work on other tasks, and as a result the tomb took over 40 years to complete and even than not to his satisfaction. During this time, from 1508 to 1512, he worked on the Sistine Chapel ceiling, though he had a dislike for painting. He was commissioned to paint the 12 apostles, but he expanded the vision to include almost 300 figures, covering over 5000 square feet in frescos, in the end omitting the apostles altogether, saying it would have been a waste of space! It is a monumental work, much more than any artist could single handedly, accomplish in one lifetime. The frescos depict scenes from the Book of Genesis in the centre panel, and on either side of these are figures of prophets and sibyls who foretold the coming of the Messiah, also are scattered smaller figures of cherubs and ignudi.

The Creation of Adam must be the most famous of these frescoes, with the hands of God and Man having an iconic status. It is the fourth or the sixth (depending on which side you count from) of the frescoes in the central panel, depicting the scene where God breathes life into Adam, the first man. Adam is in a reclining position on top of a hill stretching his left hand , somewhat passively, towards God. The right hand is masterfully foreshortened, as Adam rests on it, head shown sunk  in his shoulders.  God is shown a bearded man, arriving in swirling robes along with angels. His right hand is stretched towards Adam, with more purpose and energy. His left hand is around (what is thought of as) the yet-to-be-born Eve. This gap between the hands that Michelangelo had left, the fingers about to touch but yet not have made the contact, its a stroke of his genius. It generates so much tension and anticipation in the viewer, that it is a favourite with many critics to describe this scene as God imparting the spark of life to the first man. ( similar to how a huge electric charge can be transmitted through the thinnest of cables)

Dr. Frank Lynn Meshberger, from Indiana, was the first person to notice that the part of the painting containing God and the angels appeared to be an anatomically accurate picture of the human brain, including the frontal lobe, optic chiasm, brain stem, pituitary gland and the major sulci of the cerebrum. In 1990, he published his theory in the Journal of the American Medical Association where he argues that there appears to be communication present despite the gap between the depicted Adam and God, just as neurons transmit biochemical information across synaptic clefts. 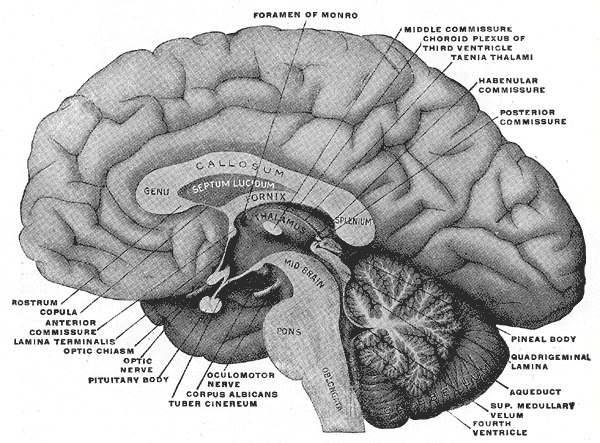 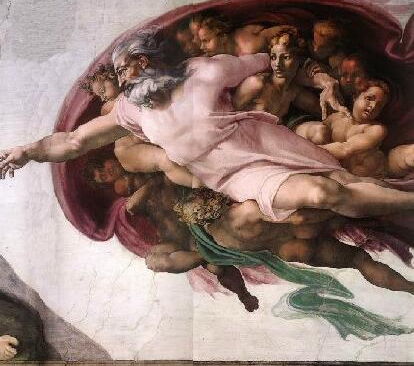 If  we compare the above two images, we can see that the back of the angel (below God) lies on the Pons, and his hip and leg on the spinal cord.  The other angel below God, has a bifid (divided into two) foot, like the two lobed pituitary. His other leg is flexed at the knee, the thigh along the optic nerve, knee  the optic chiasm and  leg on the optic tract. Its clearer if you compare God`s image to the image of the lateral cross section of the brain here at this link: http://www.daviddarling.info/encyclopedia/B/brain.html

Looking at these images, I struck me all of a sudden, of the Mother`s (Mirra Alfassa) explanation of the Creation of  Man according to the Bible. She had said that it is a story (put in a child-like manner) not of the physical creation of man, but of the  coming down of the mind onto earth. If we look at the painting, we can see that Adam is already alive, with eyes open, reaching out to God; so it cannot be that Michelangelo was showing that God was giving life (breath) to man, he is showing  the scene where God is bestowing the intellect or intelligence to Man. (so the story is not such a departure from Darvin`s theory of evolution, after all!) It seems amazing that not only had Michelangelo dvelved into such matters so deeply, but had also used those insights in his works.